US Rate Rise and Implications For Investors

US Rate Rise and Implications For Investors

After much anticipation and media speculation, on March the 16th the US Federal Reserve raised target interest rate from a range of 0-0.25% to the range of 0.25-0.5%.

The US Federal Reserve target interest rate is similar to what is known as the “Cash Rate” in Australia set by the Reserve Bank.The Federal Reserve in the US, not unlike the Reserve Bank in Australia had kept its benchmark rate steady for some time, having most recently delivered a full percentage-point cut back in March 2020 amid the start of the coronavirus pandemic. The Federal Reserve has been flagging the start of rate hikes for the last six months and started signalling that the first hike would happen at the March meeting early this year after inflation indicators kept rising.

While the conflict in Ukraine added to uncertainty around the move, the 0.25% increase was fully factored into financial markets. In fact, US shares rose on positive Fed comments around employment and economic growth.

The U.S. central bank signals its outlook for the path of interest rates with a “dot plot”, which shows how the Committee Members of the Fed – formally the Federal Open Market Committee (FOMC) – view appropriate policy. The Dot Plot below shows officials expect to raise the rates six more times this year, based on projections. 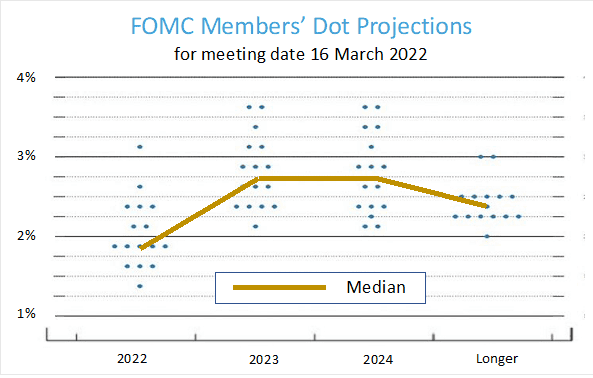 In the US inflation is at a 40-year high and the conflict in Ukraine has created additional upward pressure on inflation, particularly by higher energy prices. Nonetheless, the Fed stated that some of the inflationary pressures were related to supply and demand imbalances related to the pandemic, and they expected inflation to be at their target rate of around 2% in the longer term.

Against the inflation background, economic activity has recovered and continues to strengthen with the labour market being very tight with unemployment at 3.8%. The Fed also signalled that it will likely start decease the supply of money in the economy by not replacing the maturing bonds that were bought as part its earlier bond buying program.

The fall in stock markets since the start of the year can be attributed to market expectations around future increases in interest rates, coupled with the uncertainty caused by the conflict in Ukraine which began in February. As noted above the rise in the stock market after the announcement implies that the market had fully priced in the 0.25% increase and were confident in the Fed’s comments in relation to the health of the economy.

The Dot Plot also reaffirms that the likely path of interest rate rises will still be relatively modest. This is consistent with the market expectations. While economic conditions can unexpectantly change, most market participants are not expecting inflation or interest rates to rise dramatically.

While there is little reason to be too concerned by the first US rate hike, there are two main risks to expected returns from the stock market: 1) Inflation pressures are far more significant than anticipated and this may result in an even faster tightening in monetary policy than in the past; and 2) The war in Ukraine increase uncertainty and poses a threat of weaker global growth – notably in Europe.

The bond market seems to be looking through the second factor, as there is no sign of a “flight to safety” in long bond yields. Consistent with the Dot Plot, the 10y yields in the US (and Australia) are still under 2.5%.

In summary, while the Fed’s move to raise rates is consistent with volatile and constrained share market returns ahead, it does not imply a bear market as monetary policy is far from tight and unlikely to drive a US recession. 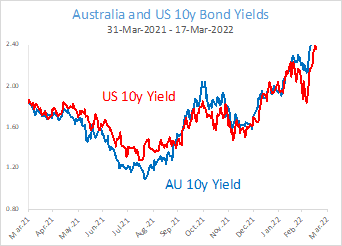 The unemployment rate is projected to fall to below 4% later in the year and to stay below 4% in 2023. However, wages growth – an important input into inflation – is expected to stay modest. At the March meeting the Board reiterated that it was prepared to be patient and would not increase the cash rate until actual inflation is sustainably within the 2 to 3% target range. 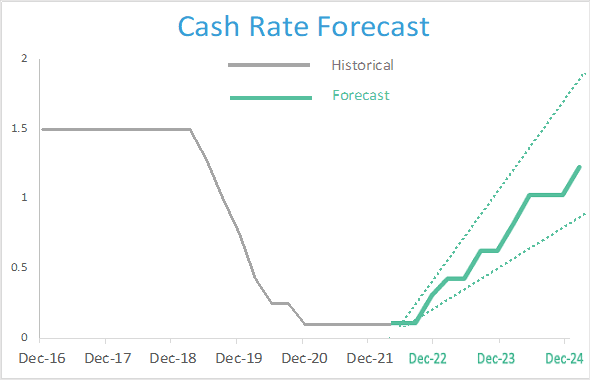 While a decline in the short-term interest rate gap between Australia and the US normally puts downwards pressure on the value of the $A this is likely to be more than offset by strong commodity prices which is being accentuated by the war in Ukraine. As a result, the negative interest rate differential should not have a material effect on the A$.

What matters for individual investors is whether they are on track to meet their own long-term goals detailed in the plan designed for them. Uncertainties around interest rates, inflation and geopolitical events will cause market volatility, which can be worrisome to investors.The best approach for investors is to accept market volatility and to stay disciplined, diversified, and keep focused on progress to your goals.

The information contained within this website does not consider your personal circumstances and is of a general nature only. You should not act on it without first obtaining professional financial advice specific to your circumstances. Before purchasing any financial product, always consider the relevant Product Disclosure Statement (if applicable) which provides full details of risks, terms and conditions.

Some details (including names) have been modified for privacy purposes and assumptions have been applied regarding future interest rates, investment returns, the client’s circumstances and other financial and economic variables for illustrative purposes – actual outcomes may vary.