New Changes To Superannuation. What Do They Mean For You?

New Changes To Superannuation. What Do They Mean For You?

The government has unveiled a suite of changes in the Federal Budget that make it easier to boost retirement savings.

While there were no significant reforms, several current schemes and regulations were either streamlined or made more accessible for both pre-retirees and retirees.

This will allow more Australians to take advantage of super’s attractive tax concessions, including older Australians who may not have received the superannuation guarantee over their entire working life.

The Pension Loans Scheme (PLS) allows retired homeowners to draw up to 150 per cent of the maximum fortnightly Age Pension tax-free against the value of their home. It’s a type of reverse mortgage as this debt (charged at a 4.5% interest rate) accrues against your home’s value.

The proposed changes in the Budget are aimed at increasing take-up of the scheme, which had attracted just 4,000 retirees by March 2021.

To make the scheme more attractive, the government will allow retirees to draw down money through the PLS as two lump sums over a 12-month period from July 1 next year. The lump sum is capped at 50 per cent of the Age Pension, which equates to about $12,385 per year for singles and $18,670 for retired couples.

This is a positive initiative, as it will help retirees who need to pay for large, one-off expenses such as buying a car or home renovations.

The government will also introduce a ‘no negative equity guarantee’, which brings the scheme into line with most commercial reverse mortgages. It ensures borrowers won’t have to repay more than the market value of their property. This was previously a small risk but could occur if interest rates rose or the value of a retirees’ home fell significantly.

Since July 1, 2018, Australians aged 65 and above have been able to downsize the family home and transfer up to $300,000 from the sale into their super fund.

The scheme hasn’t proved popular, prompting the government to announce plans in the Budget to lower the eligibility age to 60.

Downsizer contributions are not subject to existing contribution caps, making the strategy a potentially quick way to boost retirement savings if the family home becomes too large in later years.

It also now offers a way for pre-retirees who have reached their non-concessional contribution cap, to contribute more to their super if they sell the family home.

However, making a downsizer contribution can affect the Age Pension. While the family home is not included in the Age Pension asset test, the money from its sale (even if transferred to super) is included.

Older Australians will now have more flexibility to continue working and make voluntary non-concessional and salary-sacrificed super contributions with the work test set to be abolished for those aged between 67 and 74.

The law currently requires people in that age bracket to work at least 40 hours over 30 consecutive days if they want to top up their super. The work test will continue to apply when personal, tax-deductible contributions are made.

The government has also proposed a more flexible bring-forward rule, which allows people to make up to three years of non-concessional contributions in that year. The cut-off eligibility age is currently 64 but will rise to 74 years of age once legislation passes.

These changes give many older Australians more ways to boost their super, including bringing external savings into super where it is tax-free.

A Way Out Of Legacy Retirement Products

Some retirees remain locked in older legacy products that may no longer serve their needs.

The government plans to let holders of market-linked, life-expectancy, and lifetime pensions (opened before September 20, 2007) close the product and roll any reserves back into their super fund.

While this transfer won’t count towards an individual’s concessional contribution cap, it will be taxed at the 15% contribution rate.

Retirees can then decide whether to switch to a newer, more flexible retirement product. However, this complex area requires an in-depth comparison between these older and newer retirement products before making a decision.

Australians will be able to contribute more to super and also hold more assets in the tax-free super environment from July 1, 2021.

This is another welcome change given these caps were last increased in 2017.

The annual cap applying to concessional super contributions (contributions made before tax, usually by an employer) will rise from $25,000 to $27,500.

The annual cap applying to non-concessional super contributions (contributions made from after-tax income) will rise from $100,000 to $110,000.

Meanwhile, the transfer balance cap (which limits how much super can be transferred into a tax‑free retirement account) will rise from $1.6 to $1.7 million.

Before the May Budget, there was speculation that legislated superannuation guarantee (SG) rises would be scrapped or made voluntary in the wake of a recession. However, no changes were announced despite concerns the SG increases may erode already weak wages growth.

The SG will rise to 10% from 9.5% on July 1 (the first increase since 2014) and legislation remains in place for it to reach 12% in coming years. These increases will boost retirement incomes over the coming decades.

The government also unveiled plans to abolish the $450 minimum monthly income threshold to receive the SG from July 1, 2022. It will benefit about 300,000 lower-paid workers, of which almost two-thirds are women.

This is a minor change that will help make super more equitable across society and close the retirement savings gender gap. 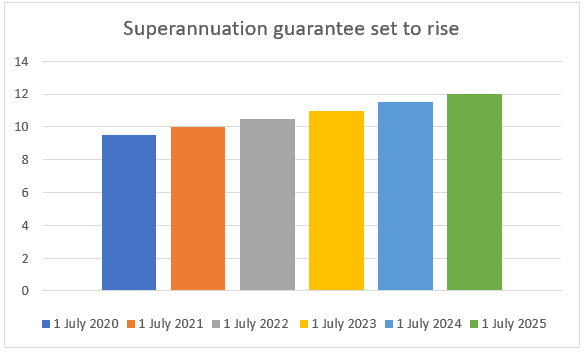 Many Australians have become locked out of the property market as house prices have boomed in the last year. The government will help prospective first homeowners by introducing higher withdrawal caps on its First Home Super Saver Scheme (FHSSS).

The scheme allows people to make up to $30,000 ($15,000 each year) of voluntary concessional and non-concessional contributions to their super fund. The Budget will increase the maximum withdrawable amount to $50,000 from July 1, 2022.

The lower tax rate within super provides a small boost when first home buyers withdraw these funds to help buy a first home. It will also help those struggling to save a deposit.

Trustees of SMSFs (and small APRA-regulated funds) will be able to continue contributing to their fund while temporarily overseas under relaxed residency requirements.

Meanwhile, new legislation will enable the ATO and the Family Law Courts to electronically share information about super assets during family law proceedings, which should ensure fairer superannuation splitting outcomes.

The ATO will also be able to transfer unclaimed super directly to KiwiSaver accounts (New Zealand’s version of super funds).

While many of these proposed super changes are relatively small, in total they offer easier ways to boost retirement incomes. Please contact us if you’d like to take up any of these options or review your current strategies.

The information contained within this website does not consider your personal circumstances and is of a general nature only. You should not act on it without first obtaining professional financial advice specific to your circumstances. Before purchasing any financial product, always consider the relevant Product Disclosure Statement (if applicable) which provides full details of risks, terms and conditions.

Some details (including names) have been modified for privacy purposes and assumptions have been applied regarding future interest rates, investment returns, the client’s circumstances and other financial and economic variables for illustrative purposes – actual outcomes may vary.