Investment markets rebounded strongly in the June quarter despite the Australian economy posting its biggest economic contraction since the 1930s in the wake of the coronavirus pandemic.

These mixed signals have created a challenging environment for investors grappling with a highly uncertain environment.

The impact of the virus still looms large with around 16 million people infected with COVID-19, and new regional breakouts, since the first cases were reported in Wuhan, China just seven months ago.

Whilst it is encouraging to see a reduction in the exponential growth of infections, the numbers worldwide remain staggering. 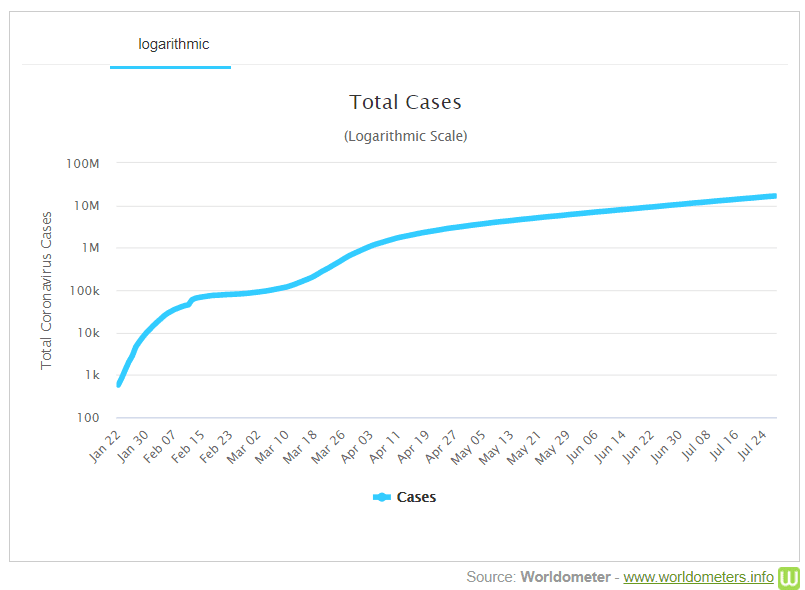 Where exactly are we now?

The coronavirus pandemic prompted the Australian government to almost shut down the economy completely in mid-March. It effectively stopped the spread of the virus but plunged the economy into recession.

Major share markets lost about one-third of their value but have since rebounded strongly on hopes of a quick recovery driven by huge government and central bank support. But an initial surge of optimism as lockdown restrictions were eased has been tempered by the latest economic data.

It suggests the economic downturn is likely to be more severe, dashing hopes of a quick V shaped recovery.

In late-June, the International Monetary Fund forecast Australia’s economy will shrink 4.5% before growing 4% in 2021. Global growth is forecast to contract even more heavily at 4.9% this year, with the virus still quickly spreading across Latin America, Southern Asia, and the US.

Australia’s unemployment rate has jumped to 7.4% and the RBA has warned that it could still reach 10%. Job vacancies posted their largest fall on record, plunging 43% over the May quarter, according to the Australian Bureau of Statistics (ABS). 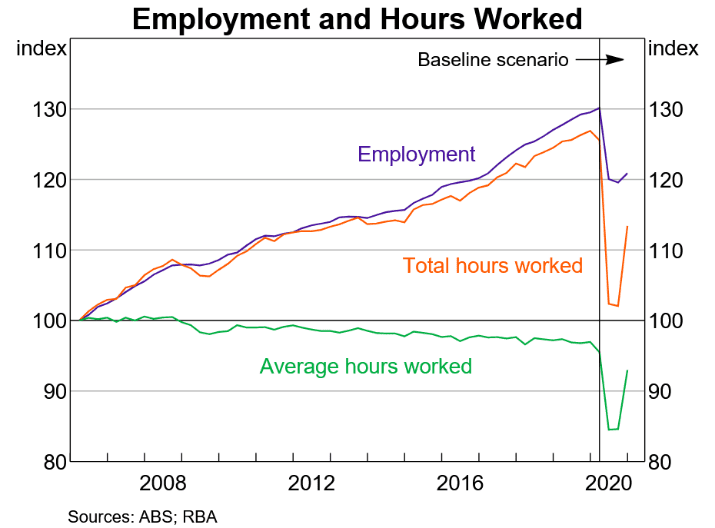 It remains to be seen from September, when major COVID-19 subsidies and rebates including the JobKeeper scheme, significantly higher JobSeeker (unemployment) payments, and bank loan deferrals will be scaled back what impact that will have on economy and on share markets.

This could present another headwind for economic growth depending on the government’s approach. The RBA has already cut interest rates to 0.25% in an emergency meeting in March and has little further fiscal firepower left.

Meanwhile, the recent re-emergence of COVID-19 in Victoria suggests a rocky path ahead. Stop-start shutdowns are likely to erode business and consumer confidence for a long period.

While the outbreak is disappointing, Australia has still managed the outbreak well and government debt is relatively low compared to countries such as the US.

US elections will be held in November as the country faces severe social unrest. The winner will play a significant role in determining the future of global trade and geo-political relationships, which have been strained in recent years. These issues will be even more important in world where coronavirus outbreaks regularly occur.

Australia’s largest trading partner, China, had effectively contained the initial outbreak but a recent new cluster of cases in Beijing shows ongoing vigilance will be required. It has so far unveiled a measured stimulus program compared to its actions following the global financial crisis.

The European Union has proposed a 750 billion euro recovery fund to help the region tackle the ongoing economic fallout from coronavirus.

The hard-to-predict impact of the pandemic can also be seen in trajectory of the Australian dollar. It hit a low of US57.4c in mid-March before briefly climbing back above US70c in early-June thanks to strong iron ore demand from China.

Australian residential property prices went backwards in May for the first time in almost 12 months, according to CoreLogic. While the decline was just 0.4%, five of the eight capital cities moved into negative territory including Sydney (-0.4%) and Melbourne (-0.9%).

House prices are expected to continue their march into the red with economists expecting short-term declines of 5-10%.

Rising unemployment and reduced working hours are also putting pressure on homeowners, with banks thus far approving repayment deferrals across more than 480,000 mortgages according to the Australian Banking Association.

While investor housing debt is highly concentrated amongst affluent  households who are well placed to weather the downturn, renters are more likely to experience financial stress. Rent discounts and deferrals, as well as a temporary suspension of evictions may leave some investors vulnerable to mortgage stress if they rely heavily on rental income, according to a recent RBA analysis. 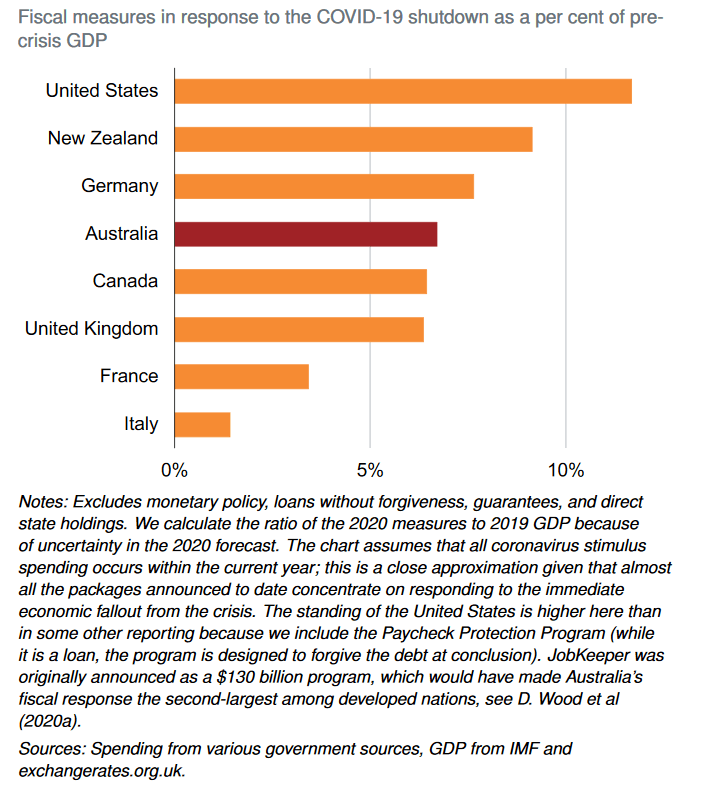 The general upward direction of markets in April and May can make it appear that an economic recovery is underway. However, market and economic cycles often move at different speeds. Economic data tends to look backward while share markets are traditionally driven by future corporate earnings growth.

However, in the years after the global financial crisis, investment markets have been primarily driven by the action of central banks, which have cut interest rates and pumped huge stimulus into their economies.

With cash rates at record lows, many investors have been forced to buy riskier assets such as shares to generate returns above inflation.

Central banks, such as the US Federal Reserve, are now again pushing markets higher with policies aimed at reviving economies. The Fed has been buying billions of dollars’ worth of corporate bond exchange-traded funds and individual bonds in the secondary market to support markets.

The chart below highlights the degree of stimulus across all avenues available to the US Federal Reserve with assets rising from $4 trillion to $7 trillion this year alone i.e. they have effectively injected $3 trillion into the US economy this year alone, and it is unlikely they are done yet if they wish to continue to support financial markets and the economy.

Put this in the context of the GFC where the US Government via their Troubled Asset Relief Program (TARP) injected approximately $1 trillion into the economy. 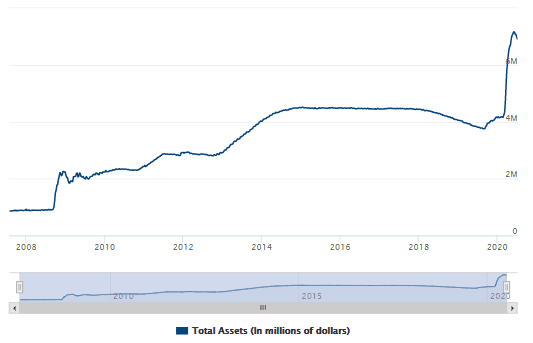 This new public debt provides easy funding to private companies and has helped push the US S&P 500 back to near record highs despite the dire economic outlook and its impact on underlying fundamentals such as corporate earnings.

The RBA has taken a more measured approach, purchasing $50 billion of government bonds, and supplying banks with a term funding facility, but it is reticent about further quantitative easing policies.

Nonetheless, the S&P/ASX 200 index has also climbed to be about 17% below its February 2020 all-time high and is trading on a forward price-to-earnings multiple of almost 20 times, which is higher than before the crisis, according to analyst Morningstar. 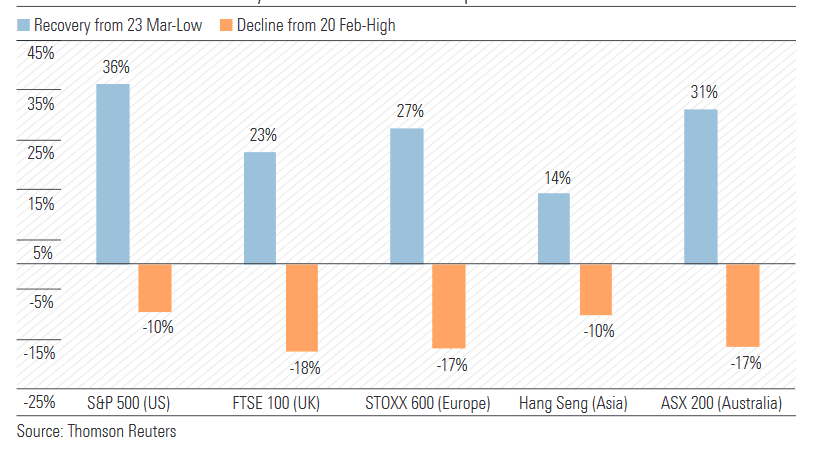 This suggests caution is warranted despite the current FOMO (fear of missing out) climate around markets.

Australian companies will begin reporting earnings results in August, which will reveal the impact of the crisis.

The earnings outlook for many companies is highly uncertain given ongoing lockdowns, particularly in certain sectors, and wary consumers.

There is a growing realisation that even if a vaccine is found, it will take time to test and rollout across the world, which has implications for consumer spending and business investment.

Many investors – particularly retirees – need their portfolios to generate regular income. It has never been harder with the pandemic prompting more cuts to already historic low official interest rates.

The RBA has taken rates as low as they are expected to at 0.25% while US Federal Reserve chairman Jerome Powell recently flagged that rates will remain near zero for years.

While there are higher income-producing investments in the market than cash, they naturally bring higher risk.

Higher-returning assets, such as infrastructure or shares, are more volatile. A range of blue-chip companies, including some of Australia’s big banks, have cut or put their dividends on hold due to uncertainty over the outlook.

While lower in the short-term, major Australian companies will still continue to produce income and pay dividends over the medium to long term.

The government has recognised the impact of the recent downturn by halving the minimum account-based pension withdrawal rate for the 2019-20 and 2020-21. This allows retirees to potentially avoid selling investment assets when markets are particularly weak.

Whilst there is much doom and gloom at present, the reality remains that this an isolated external global event, meaning that in the long term whether a vaccine or treatment is identified, or countries adjust policy to suppress or eliminate the virus that some sort of normalcy with eventuate.

If you’d like to discuss the current events or have any questions about your financial plan contact us.